As you evaluate luxury home builders in Bonita Springs, FL, reach out to CGU Homes to learn more about our passion for custom home building.

CGU Homes, a licensed general contractor in Florida, has completed luxury custom homes, home remodeling, and condominium renovation in communities from Port Royal to Bonita Bay. As the residential construction arm of Connor & Gaskins Unlimited, we offer a combined 70+ years of experience in high-end construction in the Naples area.

Why Build in Bonita Springs? 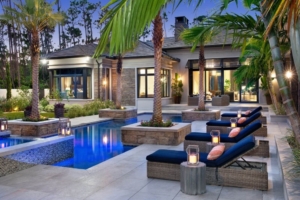 Located in Lee County, Florida, Bonita Springs is on the Gulf Coast about 30 miles south of Fort Myers. It was initially named “Survey” in the late 1870s by surveyors from the U.S. Army Corps of Engineers who were mapping out southern Florida.

By 1912, investors laid out a small town with streets and avenues and renamed the town Bonita Springs. It attracted visitors in the 1920s via the Fort Myers-Southern Railroad, but its popularity grew quickly after Interstate 75 opened.

Living in Bonita Springs is as serene as it gets. It is historically untouched by extreme weather. Winters are a paradise with little to no rain and plenty of sunshine, and most of the beaches sit on either state territory or preserves so the city can keep them in pristine condition.

The suburban neighborhood is perfect for those who love outdoor activities, such as fishing, boating, kayaking, hiking, biking, and camping year-round along a nearby freshwater lake or sparkling stream.

If you dream of a Gulf-front home, canal-front home, riverfront home on Spring Creek or the Imperial River, or bayfront home on Hickory Bay, Estero Bay, or Fishtrap Bay, you will find it in Bonita Springs.

Other Luxury Neighborhoods in the Naples Area

With its sandy white beaches, impressive sunsets, and expansive views of the Gulf of Mexico, Naples properties are among the most sought-after in the world. CGU Homes builds and remodels homes in these and many other Naples neighborhoods:

Pelican Bay: There are 65 neighborhoods in Pelican Bay clustered around three miles of the most desirable beach in the world. Except for the Strand neighborhood of Gulf-side estates, homes are separated from the beach by Clam Bay and a mangrove forest, and some surround the private, 27-hole Pelican Bay golf course.

Port Royal: Located on the south part of the peninsula that includes Old Naples and Aqualane Shores, Port Royal is the premier boating community in Naples. Beachfront mansions line the Gulf of Mexico, and most of the 500 or so single-family homes feature backyard docks on Naples Bay or one of several deepwater canals.

The Moorings:  Centrally located and stretching from U.S. 41 to the Gulf of Mexico, The Moorings neighborhood offers the idyllic Naples lifestyle. The majority of the homes feature boat docks on Moorings Bay, Bowline Bay, or Compass Cove, as well as fabulous views.

CGU Homes, the leading custom luxury home builders in Bonita Springs, FL, will help you build the home of your dreams. Get in touch with us online or by phone at (239) 963-7995.